A forbidden crush. An oblivious bodyguard. A fake honeymoon. 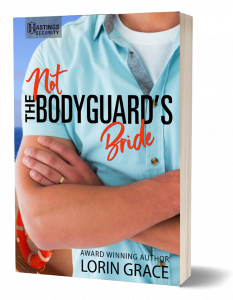 A year and a half ago, Alan Hastings rescued Elle. Today she is one of Hastings’ top security guards, only Alan keeps trying to protect her. Meanwhile, Elle works hard to keep her feelings for Alan hidden to keep a happy workplace.

Spending most of his day behind Hastings Security’s computers, Alan doesn’t have as much field experience as his brothers. When the assignment comes to work undercover on a cruise, Alan couldn’t be more surprised. Until he finds out that Elle will be undercover as his new wife.

Faking newlyweds would be simpler if the kisses weren’t so real. After a daring rescue is required when Elle is kidnaped with their client, forcing the fake newlyweds to face some hard facts. With the help of some zany cruise ladies, Alan may just figure out how to make his fake romance into a happily ever after.

Not the Bodyguard’s Bride is the fifth book in a series of the Hastings Security sweet bodyguard romantic suspense novels. If you like Hallmark movie-worthy heroes willing to protect the ones they love, then Hastings brothers are your men.