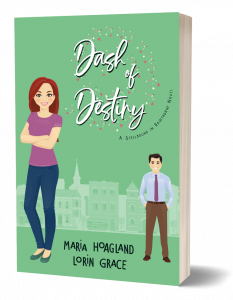 Eden Noyes hasn’t been back to Hawthorne, Massachusetts, since the summer before college. Sure, her ex, celebrity motivational speaker Carter Hughes lives there, and she doesn’t exactly want to see him. And strange things—things she can’t explain—always seem to happen in Hawthorne that don’t anywhere else, but nobody except Grandma Tansy has any idea the real reason she’s been staying away. That is, if Grandma Tansy even remembers. It seems she’s been forgetting everything else. Which is why Eden trudges back to Hawthorne with her secret.

Carter Hughes doesn’t exactly want to see Eden either. She blindsided him years ago when she left, and he’s not about to let her mess with his heart again. Things may not be going so great for him, and Eden Noyes returning to town can only make things worse.

Grandma Tansy says it’s their destiny to end up together, but what does she know? It’s going to take more than magic to make up for the tragic mistakes in their past.