Years ago, serialized novels were published in newspapers and magazines.  This April I am going to publish a serial novel on Facebook, and I need your help. As my readers, you can help determine what the next chapter will be. This will be messy, exciting, and ever-changing as we build our own story together.  Please come join in the fun. Give your opinions and let’s see where this goes!

Read the first installment below!

I stared at the vacant space in the cabinet under the bathroom sink. The last Wednesday in February I purchased a 12 pack of two-ply triple roll toilet paper literally hours before the run on toilet paper began. My roommate and I calculated the rolls would last us until the end of April. 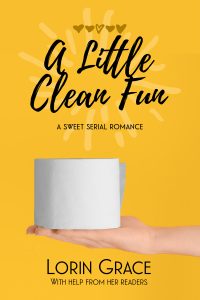 Running out of TP was not a joke. Even if it was the first day of April. Stashed in my purse, twenty neatly folded squares lay hidden in case of emergency. On Sunday, I counted seven rolls when I pulled out this one. I turned the empty paper tube over in my hands, the half-inch by two-inch strip clinging to the glue refused to multiply.

Frantically, I checked the rest of the cupboards in the bathroom, including the one that always stuck. A plunger, several old towels (once belonging to my grandmother), a stash of toothbrushes, toilet cleaner, eight bottles of hand sanitizer, and a rubber alligator. The alligator had been in the same spot for as long as I can remember, relegated to the far back corner because it frightened my younger sister when she was two. I’d missed his smiling face. He floated on his back during my childhood bath times. I pulled it out for my next bath in the claw-footed tub. Now was one time I needed one of the crochet doll toilet paper hiders to appear. Grandma had one for every season. I regretted not keeping one perched on the toilet tank.

I ran down the steep staircase to the basement and the tiny bathroom my grandfather once used as a darkroom.  Someday I would refurbish the basement of the house my great-grandfather built eighty years ago after I finished the main floor. Except on Thursday nights when I did my laundry, I avoided the basement and its discarded contents.

A quarter roll of industrial-grade single-ply hung from the hook next to the rusted sink. Hallelujah! Mom once told me angels were my ancestors that had passed on. Apparently, my grandfather watched over me tonight, as no one else could have used the scratchy paper, even if it had been on sale half price.

Twenty minutes later, I scrolled through my apps and contemplated my dilemma. According to the shopping websites and our local Facebook ‘buy, sell, trade’. Not a store in the valley had toilet paper in stock. Even the hidden stash at the hardware store had sold out.  On Pinterest, I found a helpful pin on making a bidet from a squeezable mayonnaise bottle. My roommate’s nearly empty mayo bottle sat in the fridge.

Food was one thing my roommate, Julieanne. left when she packed up her car and returned home yesterday afternoon. She hadn’t left my favorite sweater she borrowed for her Valentine’s date or my Wonder Woman t-shirt that she wore in a TikTok video last week. It was hard to be mad at her. Jobless since mid-March, Julieanne painted the dining room, cleaned out the flower beds, and organized the treasures in the attic instead of her overdue rent. Last night when her mother called saying they had admitted her father to the hospital, with a heart attack, not the virus, Julieanne ran around the house packing as fast as she could, stuffing all of her belongings into her beat-up Honda. I couldn’t even begrudge her a couple rolls of toilet paper. I would have taken them if I had to drive 1400 miles. She still could have left one for me.

Maybe the stores would have some tomorrow. If I went out early, I might find a four-pack of generic. After the industrial-grade, which might have been older than my twenty-seven years, generic would feel like the expensive stuff. Most stores reserved the early shopping hours for seniors, and there might not be any left.

Far from solved, I pondered other solutions. I could cut up one of my grandmother’s ancient towels. Before disposable diapers, people had washed them out. I could do the same. With no roommates, who would know? I wasn’t expecting company anytime in the next month and I knew better than to take my phone into the bathroom during a Zoom conference call.

Before wielding the scissors or emptying the squeezable mayo bottle, I checked the local trade section of the Facebook group. A recent post caught my eye.

Single Man with toilet paper searching for a single woman with hand sanitizer for some good clean fun.