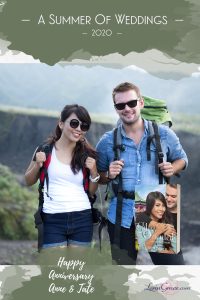 Another first anniversary. Anne talked Tate into a trip through several state parks. What she didn’t tell him is that the ones she chose are notorious for not having cell reception. Poor Tate, how many days can survive without his technology? So far he’s made it three. Last night they counted stars sitting in front of their tent in the Cascades. Tomorrow, who knows… Tate’s office manager doesn’t expect him back for two more weeks.   ❤