I haven’t written a book about Emma and Thomas’s love story. Their legacy of love influences every relationship in the American Homespun Series. The tradition they started continued for generations to bless the lives of countless grandchildren and their grandchildren’s grandchildren. 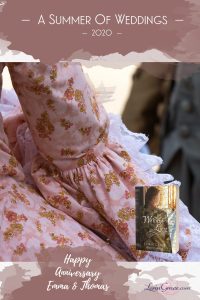 In January 1771, Thomas proposed to Emma… long story short, they were caught in a blizzard while on a sleigh ride and said their marriage vows under the stars. (They eventually paid the fine for not being wed according to Massachusets law.)  Thomas brushed Emma’s hair one hundred strokes every night, adding one stroke every year on their anniversary for the entire thirty-eight years they lived together. The only time he missed was during the several months he was away during the American Revolution delivering supplies to the front lines.

It passed the tradition of brushing hair down along with a silver hairbrush rumored to be crafted by Paul Revere, I’m not sure when it is today. The last bride to find a way to continue the tradition was Candace Wilson Ogilvie and her husband Colin even if they don’t need a hairbrush. ❤